Bream is a significant part of the population of young and mature Lakes. It should not be confused with bream, which mature lakes no longer holds. lizard up in weight lakes 400-500 g. In late summer it is thick and round, its succulent meat and fat, well prosalivaetsya, tasty in dried form. Purposefully worth catching only large bream. 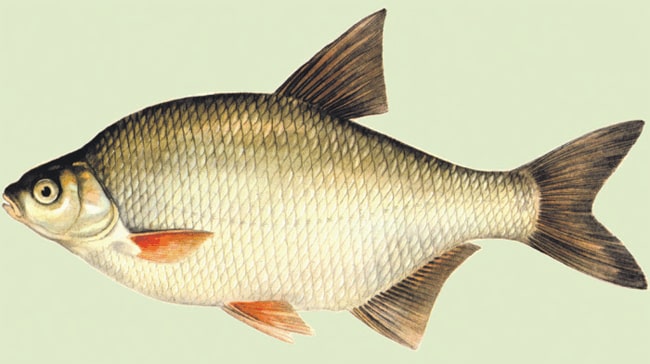 Flocks of fish in the lakes are numerous, they hold different age fish. Such jamb moves over the pond, adhering to certain trails and Graphics.

Small bream graze along the edge of the algae, where he is hiding from predators. Large Stay away from shore and deeper – at depths 1, 5-2 m. Catch it better, getting to explore and tame place.

Bream goes well on bait, biting as the animals, and the vegetable packing. Holidays do so, that the nozzle is not left in the mud or water moss.

Harsh and hasty potyazhka inherent, rather, little things. Potyazhka - the movement of line when the fish grabbed the bait begins to pull her (in fishermen's speech).

Large bream shows long potyazhku, withdrawing float obliquely in depth. It happens laying float – when the fish remains above, than the omitted nozzle.

Like other Lakers, bream knows nothing about the hook, fishing line and sweeps and is not afraid of all this, so no need to hurry with hooking. And the hook is better to use a bigger.

Once I started fishing on the lakes with crochet №3, 5, then he moved on to №5, I am now increasingly used №6-7 and led a simple relationship: the average weight of fish caught is proportional to the hook. true, still still on the hooks I sometimes come across №8 50 – gram nedomerki.

Tooling for large bream is better to take an average ogruzkoy, that the nozzle is not stuck in the strands of ooze somewhere vpolvody. In addition, if the weight is not enough ogruzki, slowly sinking nozzle intercepted smaller redeye.

What makes it different from the white bream – not just read in the literature of different fishing, but I did not consider it necessary in this deal: bream and white bream. We bream pink fins, and white bream. But I still believe, that make sense to separate these two fishes there. Especially, that the experts still allocate conv, beads and beloglazku. Well, who needs, let him and understands, and we will be better to catch. On Sunday came ashore late and holidaymakers with a fishing rod in his hands on the bank there were many. Climb into a bunch did not want to and we decided to try out new places. We traveled on, but there were fishermen. Still, for a hideaway we got.

Water markedly increased and broke walked spawning pike. Throw the rods could not be in all places free of undergrowth, and we both began to fish one spot. First took medium-sized sorozhka and we have the desire to look for more fishing spots. But, gradually, increasingly began to fall bream with palm, and sometimes larger. Interesting, that it is almost pecked at one point. Styles throw bait centimeters 20 in strontium and already come across or sorozhka rudd. But they were small in this day, and bream catch was interesting. Several fishermen boating, then spun and motorboat inspection. That did not stop wanting to stretch the network, although, I thought, fish and they caught. Outwardly, nothing has changed, but suddenly biting bream completely stopped.

I really wanted to check their seat, where it was on the eve of a major soroha, but there was 5 machines and desire it, we quickly lost.

But it was time to check out other places. We stopped in Kulushevo. On the shore there is no catch, and by boat swim away and catch the same bream and sorozhku.

We visited and Kyrnysh. There, the fishermen did not smaller. Catch and boats, and from the shore, but no large fish. We stopped at a, clearing flooded. At a depth 30-40 See full swing Kolobrodov pike. Before our eyes, they made such a fuss, that forced to forget about fishing. And then two small pike showed us the love for pike in meters from the shore. They swam in the shallows, so entrained together, that we did not pay attention. This was beautiful. This amazing spectacle we have completed your fishing trip. Beautiful still is time on the river – Spring!