Pike can be hot in the summer afternoon.. But near the dams on the river in such weather, predators can still be caught.
Pikes are known, don't like heat, so in the summer for many anglers, preferring to catch predators, the time is not very favorable. In stagnant bodies of water on warm sunny days, only in the morning and evening hours can you count on biting pikes. But, Fortunately, there are exceptions.
Zones below river dams and during warmer months, like a magnet, attract pike. And fodder fish appreciate the flowing and oxygen-rich water behind the dams. Predators follow their prey, and they can be caught even in typical beach weather. 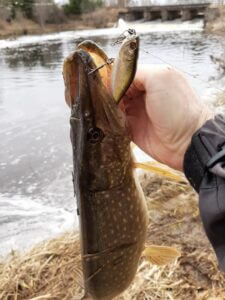 Along with pikes, other predatory fish also accumulate near the dams.. Therefore, spinningists can count on a bite of zander, heads, soms, trout, asp and perch. However, you can also purposefully catch pike.. But since in many rivers there is a high risk of hooking catfish, fine gear is unsuitable in this case. In addition, the runners, pike inhabiting the current show a noticeably stronger resistance, than their relatives in stagnant bodies of water. To catch at the dam, you must have spinning rods with a test of at least 50 g.

On larger rivers 2,7 or even 3 meters allow you to make long casts. Shorter models are usually used on smaller rivers.. Use powerful inertia-free coils with a braided fishing line with a tensile strength of about 8 kg. As a leash use a steel cable or thick fluorocarbon. Too thin gear is not needed. Powerful swirls and strong currents do not allow pikes at the dam to carefully examine the proposed bait. If the predator does not attack immediately, proposed production in the blink of an eye will disappear from its reach.

For successful pike fishing at the dam, the deciding factor is. Need to get their attention at all costs.. The best lures for catching dam pike are wobblers. Simple and inexpensive models provide the greatest success.. It is necessary to choose voluminous krenki. Lures should make a loud noise. The lively game of the bait and the acoustic stimulus in the form of noisy balls are much more effective at the dam, than another expensive Japanese twitchbait. Twitching implies aggressive and high-speed posting that helps to find an active predator. 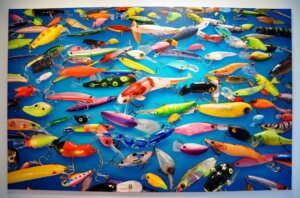 Slender wobblers when fishing for pikes in strong currents are ineffective
as well as pauses in spinning wiring, and varied bait harness. A relatively discreetly walking bait in seething water behind a dam behaves, like one of hundreds of bastards, who are floating around. Crank, with a uniform and relatively fast wiring, constantly creates intense vibrational waves. He has a good chance to stand out from the mass of food fish and attract the attention of pikes.. 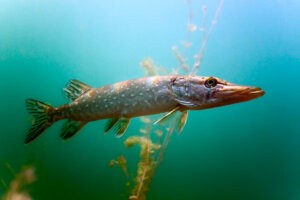 For aggressive posting of "fat men" you need to choose brightly colored lures. true, and natural-colored lures regularly bring bites. However, most pikes come across Firetiger lures even on rivers with fairly clear water.. Along with the form and game of the bait, the depth of the cran's stroke also plays a decisive role.. Models, going near the surface, rather unsuitable, since attract, mainly, chubs and chubs. Pikes peck near the dam almost always near the bottom. Therefore, it is better to use deep-going wobblers, which can be recognized by the long blade. From time to time, it can calmly touch the bottom of the pond.. When choosing the size of the bait should be restrained. With wobblers long 6-10 see you can do better. 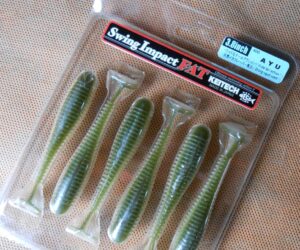 Vibration tails should be the same size., which are used in summer fishing for pike. The soft plastic bait, along with the kraim, is also good for catching an inert pike.. When choosing a tail, the reaction of the bait also plays a big role. Vibro-tails with a wide tail and with ribs on the body are most catchy, as they produce pronounced vibrational waves. Due to its small size, catch on sheds with only a single hook No. 3/0 or no 4/0 and abandon the extra tee. As with lure fishing, silicone bait served at the bottom. They can be carried out quite actively.. Fast and characteristic jig jumping, with which the bait is held above the bottom, especially well perceived by pikes at the dam. From time to time, the jig head should hit one bottom, therefore, in strong currents near the dam, relatively heavy jig heads must be used.

noticed, that the two zones near the dam are the most favorite habitats for pikes. On the one hand, these are pronounced reverse flow zones, Where
there are relatively deep pits at the bottom of the reservoir. These zones are easily recognizable by the circular and intermittent movement of water on the surface.. As a rule, such areas are located or near the coast, or somewhat behind the dam. The vibrotail is the ideal bait for catching them.. The other zone is often clearly underestimated by the "pike". This is the spillway of the dam, i.e. a foaming line, which is located directly behind the dam.

With a not very careful look, hardly anyone can imagine the presence of fish here. In reality, under the water surface there is a large zone, well protected against current, in which pike await prey. Often small fish, who venture above the dam too close to approach its ledge, captured by the current and washed down. These feed fish – welcome food for pikes waiting for them there. In the presence of turbulent eddies on the surface in
the discharge of the silicone bait in this place can be difficult
or impossible at all. Deep Cranks, opposite, can be served there perfectly. You can throw wobblers further in fast flow and immediately begin to rewind. It takes a little time, and the bait grabs a pike.